The Wedding Biz – 206: ROBERT SHERMAN/Washington Talent – Delivering Happiness One Event at a Time and Forming A Partnership

In this episode of The Wedding Biz, Andy is speaking with Robert Sherman. Robert is the owner of Washington Talent, the iconic entertainment company out of the Washington, DC area. He and his partner purchased the company over twenty years ago and have transformed it, taking it to a whole other level. Robert is passionate about what he does and is in it to bring joy not only to his clients but also to his industry partners.

Robert graduated from college with an accounting degree but later decided he wanted to go to law school, during that time he also played drums with his band Onyx. The group was doing well so they hired Washington Talent to book gigs for them. He later worked with them as their in-house counsel. At a time when DJs were all the rage, their band was creating moments for clients and interacting with both kids and adults at events. Robert began building new bands in the ’90s and, over the years, became good friends with the owners.  When they decided to sell, he bought the company and now they are more prominent than they have ever been.

Making people happy, one event at a time is their motto, and Robert wholeheartedly believes it. He says that’s what it’s all about, it’s all about the why. You have to make everyone happy to be successful in the event industry, internally and externally. Understanding event planners and knowing that your job is just one small part of their large production is why he has the reputation of being so easy to work with.

Listen in as Robert and Andy also talk about forming partnerships and how it took them over a year to commit to becoming partners with Andy’s iconic music and entertainment company, Kushner Entertainment. Trust and synergy are essential when you are thinking about taking on a business partner, and the influx of new ideas can get you re-energized. You must reinvent or die in the event industry, and that is what they have both done.

You won’t want to miss this exciting conversation about bands, partnership, and happiness. When you listen to Robert talk, you can feel how much he loves what he does and how dedicated he is to his music. Custom-designing music for every event is paramount for him and his company, and he gives us a little insight into how he makes it all come together.

[06:04] He went to college and majored in accounting, which he says was the best education he could have gotten.

[07:37] While playing in his band Onyx, he went to law school, started to practice law, and began forming and managing bands.

[08:53] Robert hired Washington Talent Agency to get jobs for them.

[12:34] Washington Talent hired him as their in-house counsel, but he was also building new bands.

[13:34] In the DC area at that time, all bands were partnerships, but that template didn’t work. Robert’s was different.

[15:30] Washington Talent’s owner was a good friend of his, so when a partner retired, they asked Robert if he wanted to buy it.

[16:32] When he took over, he had no experience with running a business, and was very nervous.

[20:58] How do you get planners in your corner? You have a reputation as a person that is easy to get along with, how did you inspire that?

[25:49] He chats about what he learned from a company in Las Vegas.

[30:43] How do you feel about DJ’s vs. Bands? Is the responsibility different?

[34:57] Andy and Robert discuss their new partnership and how it came to be.

[40:04] Robert speaks about the collaboration and how it took over a year for them to commit. They took each other out of their comfort zones and re-energized themselves.

[42:54] He talks about getting tired of what he was doing and looking for the next thing.

[45:06] Robert’s company is bringing a powerful infrastructure to Andy’s business that he didn’t quite have before.

[46:01] He wants to expand his company now into other areas, and bring happiness to more people; he also wants to improve what he already has.

[48:19] Personally, Robert wants to feel good about what he does, and to him, that’s a personal success. 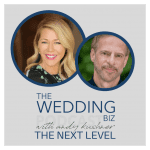 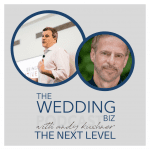 The Wedding Biz – 207: THE NEXT LEVEL – SEAN LOW Discusses ROBERT SHERMAN/Washington Talent – Creating Happiness One Event at a Time and Forming A PartnershipAll Network Episodes, Events, The Wedding Biz, TWB - The Next Level