REVISIT: Due to popularity, we replay Andy’s inspiring conversation with the artist behind three enormously popular wedding songs—Edwin McCain.  Edwin first gained industry attention with his indie album Solitude. He toured extensively with Hootie and the Blowfish, then signed with the same label (Atlantic Records) to release his first major-label album Honor Among Thieves. His second album Misguided Roses, spawned his first major hit single “I’ll Be”—it was featured on the TV show Higher Ground and the movie A Cinderella Story, then absolutely exploded when featured on Dawson’s Creek. His next big hit was his recording and performance of Diane Warren’s song, “I Could Not Ask For More,” which first appeared on the soundtrack of the Kevin Costner/Robin Wright movie Message In A Bottle. Edwin is refreshingly open and vulnerable with Andy and reveals fascinating stories behind both his struggles and triumphs. And, of his own volition, brings up why he still loves weddings and how grateful he feels for the opportunities he’s had in his career.

Don’t forget to listen to Andy’s new podcast, The Music Makers. It’s a podcast about behind-the-scenes stories from some of the most influential music industry pros around including artists, recording engineers, record producers, songwriters, managers, record industry executives, and more. You can find The Music Makers podcast by searching for that term in your cell phone’s podcast app or going to www.themusicmakers.com.  We are all experiencing quite a bit of stress and other issues during this pandemic. Andy has put together a list of the top ten tips for dealing with stress, which he has compiled from interviews with icons of the wedding and event industry. If you would like a copy, go to www.theweddingbiz.com/toptips. 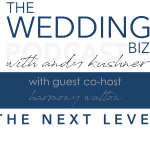 The Wedding Biz – 146: THE NEXT LEVEL WITH HARMONY WALTON DISCUSSING JENNIFER STEIN, EDITOR IN CHIEF DESTINATION I DO MAGAZINEAll Network Episodes, Events, The Wedding Biz, TWB - The Next Level 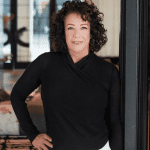