The Wedding Biz – 396 TOM KEHOE: How a Driving Gig Became a Designing Empire

Andy welcomes you to join him in this episode of The Wedding Biz as he interviews Tom Kehoe, the C.E.O. of Kehoe Designs! Kehoe Designs is a full-service event design and decor company specializing in social and corporate events including but not limited to private parties, luxury weddings, fundraisers, trade shows, product launches, festivals, and retail grand openings. Tom is also the owner of the events venue The Geraghty and BlackOak Technical Productions, and he was awarded top 50 event designers by BizBash in 2019 (along with other recognitions)!

Tom shares his story with Andy, revealing that he was only sixteen years old when he started working in floral, initially as a driver for a flower shop and then eventually in the store itself. He then, a couple of years later, attended Florida International University where he double majored in Business and Hospitality Management, initially believing that he wanted to own a hotel. Soon after graduating, however, life took an unexpected turn when he was offered the shop where he worked as a teenager! That shop ultimately took the form of the empire that he has now, and the rest is history!

Tom walks us through the process that tends to go down between him and his wedding clientele, describing the process as a fun one which he considers key. He also shares some memorable events that he has designed for, including one in which he used projected lighting to make Lake Michigan appear to change color! He shares how he handles stress and anxiety and how he balances the creative side of his job with the business side of his job, and he also enthusiastically reveals that he loves constant change and that that is how he stays relevant in an industry that changes every day.

Tom had actually never been interviewed on any podcast prior to this one, so Andy is so thankful that he took the time to have a guest spot on The Wedding Biz and chat with him. He is also appreciative of Julie Novack, C.E.O. of PartySlate, for referring Andy to Tom. Be sure to visit Tom’s website and his social media platforms, and also be sure to share this interview with at least three good friends and/or colleagues who might benefit from and/or enjoy it and to leave a top review of the podcast wherever you listen!

Have you heard about Stop and Smell the Roses with Preston Bailey on The Wedding Biz Network? Listen as Preston shares the secrets, tools, and technologies behind his extraordinary ability to create a theatrical environment out of any space. Also, don’t forget about Sean Low’s podcast The Business of Being Creative, where Sean discusses the power of being niched, pricing strategies, metrics of success, and so much more. You can find both shows on The Wedding Biz Network.

Become a patron and support Andy and the show! If you are so inspired, contribute!

[1:50] – We discover that Tom started his floral career when he was only sixteen years old!

[4:17] – Tom reveals that when he went to college, he thought that he wanted to own a hotel.

[5:02] – We learn how Tom came to buy out the flower shop where he worked as a teenager.

[6:53] – Tom discloses that he has never had any partners but has a great team.

[9:13] – Tom walks us through the usual process with his wedding clientele.

[17:12] – Tom details an event where colored lighting was projected onto Lake Michigan.

[19:36] – We discover whether or not Tom handles galas differently than he does weddings.

[27:53] – We are told how Tom handles the challenge of balancing creativity with business.

[30:04] – Andy and Tom discuss how eye-opening it is to track the time and the money that goes into the job.

Title Sponsor: This episode is sponsored by Kushner Entertainment & PartySlate. 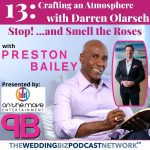